“Crime fiction readers aren’t different than readers of any other genre” says author and KWF alumnus Ian Hamilton, “they want to read about memorable characters. When they find one, they are drawn back to him or her. I get emails from readers from all over the world who… identify with and almost feel a kinship to Ava… The character has to be able to get into people’s heads. Ava does.”

With thirteen books in the Ava Lee series and counting, Ian has certainly proven Ava’s ability to capture our attention. The series has been shortlisted for numerous prizes, including the Arthur Ellis Award, the Barry Award, and the Lambda Literary Prize, and BBC Culture hailed Ian as one of the ten mystery/crime writers that should be on your bookshelf.

This year Ian brings us two new novels, including The Mountain Master of Sha Tin, which sees Ava facing an old enemy, paired with a new foe, and a new spin-off story called Fate, featuring a familiar face. Set in 1970’s Hong Kong, Fate depicts the Fanling Triad’s race to find a candidate to replace the recently deceased Dragon Head before the power vacuum draws the attention of rival gangs. As members jockey for the prestigious position, an inconspicuous candidate slowly comes to the fore – a young administrator known as the White Paper Fan, Chow Tung, or simply “Uncle” . . . 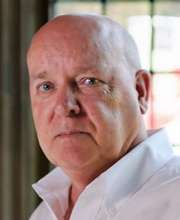