Award-winning playwright, actor, and provocateur Ins Choi is delighted at polarized reactions to his play, Subway Stations of the Cross. “Both religious audiences and non-religious audiences have been offended. As well, both have loved it—obviously, for different reasons.”

Ins recently released an illustrated book version of Subway Stations of the Cross, which is about the journey of an ancient faith in today’s restless world. His celebrated solo show was inspired by a real-life encounter with a homeless man he met on a park bench in downtown Toronto in 2002.

Initially, Ins had dismissed him as a crazy man, but soon “realized that he was an angel or a prophet of God. I never saw him again but that experience stuck with me, inspiring my writing.” The 14 spoken-word poems and songs that make up Subway Stations of the Cross are written in the voice of a nameless vagabond who is both beggar and seer.

Kim’s Convenience, Ins’ first acclaimed play, has been adapted for TV and will air on CBC in 2016. It also won Best New Play and was Patron’s Pick at the 2011 Toronto Fringe Festival, launched Soulpepper Theatre’s 2012 season to a sold-out run and rave reviews, and has since toured across Canada. Subway Stations of the Cross, which debuted in Toronto at the Soulpepper Theatre earlier this year, promises to be another Canadian favourite.
Ins lives in Toronto with his wife and two children.

Appearing in 8. Subway Stations of the Cross 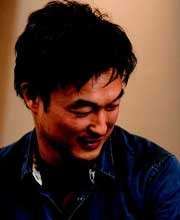