“I felt rejected by mainstream society because of the way I was treated by teachers, police ofﬁcers and my family — all of whom were failing to help me solve my problems, and often making them worse,” says author Jamil Jivani. “This made it easier to identify with the young men my country pointed ﬁngers at… We were part of the same tribe.”

After the 2015 Paris terror attacks, Jamil found that the men responsible seemed familiar. He didn’t know them, but the communities they grew up in and the challenges they faced mirrored his own upbringing. In Why Young Men: Rage, Race and the Crisis of Identity, Jamil examines the path his life took, and the cultural and social influences that nearly led him in another, darker, direction.

Jamil attended Yale Law School, where he is now a visiting professor and past president of the Yale Black Law Students Association. He founded the Citizen Empowerment Project, an organization leading initiatives related to issues like policing, racial profiling, and economic development. He has worked for a US senator, as a high school teacher, and a corporate lawyer. He was named Young Lawyer of the Year by the Canadian Association of Black Lawyers.

Jamil was born in Toronto and works in Connecticut.

Appearing in: The Big Idea: Racism, Sexism, Xenophobia, and Violence: Connection and Cure 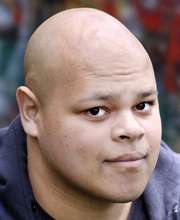