Author Janie Chang started her globe-trotting career early. Born in Taiwan, she moved to the Philippines, Iran and Thailand before settling in Canada. A graduate of The Writer’s Studio at SFU, Janie is also the founder and organizer of Canadian Authors for Indies.

Her first novel, Three Souls, was a finalist for the BC Book Prize’s Ethel Wilson Fiction Prize and was longlisted for the International IMPAC Dublin Literary Award.

Her new novel, Dragon Springs Road, takes readers on a journey through twentieth-century Shanghai, exploring an ancient imperial dynasty’s collapse and a new government’s ascension from the perspective of two unlikely friends – a child of privilege, and a Eurasian orphan. The Eurasian underclass, often children of prostitutes “were unacknowledged and unwanted”, explains Janie. “… the protagonist… must endure a trifecta of social condemnation: no family, a girl and of mixed blood. This opens up… a wealth of themes: race, women’s rights, identity and belonging…. I just had to write the story.” Reviewers are certainly glad she did. The book was called “a remarkable read, brimming with magic and the grit of realism” in a Quill & Quire starred review, and a “sensitive, intelligent novel” by the Vancouver Sun. 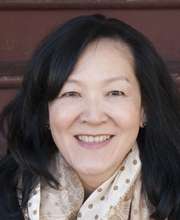