One of this year’s most anticipated poetry collections, it’s the translation of an anonymously written Icelandic epic from Old Norse to English. Jeramy, known for the technical agility and restless inventiveness of his original poetry, holds an MA in Medieval Icelandic Studies.

“Dodds seems like the Edda’s ideal translator, bringing his own fantastical imagination and deeply Anglo-Saxon diction to the masterpiece,” writes Michael Lista in the National Post.

Jeramy grew up in Orono, Ontario. He received a BA from Trent University in English Literature and Anthropology. He is the winner of the 2006 Bronwen Wallace Memorial Award and the 2007 CBC Literary Award for poetry. His first collection, Crabwise to the Hounds, was shortlisted for the Griffin Poetry Prize and the Gerald Lampert Award, and won the Trillium Book Award for Poetry.

His poems, which have been translated into Finnish, French, German, Hungarian, Icelandic, Latvian, and Swedish, “resonate physically with cunningly crafted language while they successfully amuse the intellect,” writes The Globe and Mail. Jeramy, a poetry editor at Toronto’s Coach House Books, lives in Montreal. 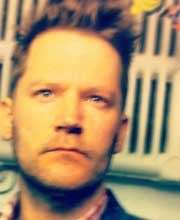