“I am a novelist,” says Jocelyne Saucier, “and I think that it is because my own life is not enough. I write fiction because I need to live lives other than my own. It’s also because I love the act of writing; I love prose, building sentences, the work of words.”

Jocelyne is the author of several acclaimed novels, many of which have been translated into English by Rhonda Mullins. And the Birds Rained Down (Il pleuvait des oiseaux), was a finalist for the Governor General’s Award for French to English translation, and garnered Jocelyne the Prix des Cinq continents de la Francophonie, making her the first Canadian to win the award, and was a CBC Canada Reads Selection. Jocelyn’s La vie comme une image (House of Sighs) and Jeanne sur les routes (Jeanne’s Road), were finalists for the Governor General’s Literary Award. Les héritiers de la mine (21 Cardinals) was a finalist for the Prix France-Québec Philippe-Rossillon and winner of the Governor General’s Literary Award for French-to-English Translation.

In And Miles to Go Before I Sleep, Jocelyne continues her literary exploration of aging, identity, and self-determination. “On September 24, 2012, Gladys Comeau climbed aboard the Northlander and was never again seen in Swastika, which is not even a town, not even a village, just a community along the railroad line.” Where she went, and why, drives the reader, and our unnamed narrator, to undertakes a rigorous investigation of her disappearance, discovering, along the way, a series of complex individuals.

Jocelyne was born in New Brunswick and now lives in Abitibi, in Northern Quebec. 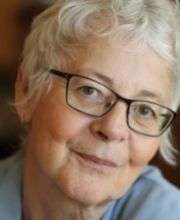