John Elizabeth Stintzi (JES) is a non-binary and trans novelist, poet, visual artist, editor, and teacher. They were born and raised on a cattle farm in northwestern Ontario.

They have been awarded the RBC Bronwen Wallace Award for Emerging Writers from the Writers’ Trust of Canada, as well as the inaugural Sator New Works award from Two Dollar Radio. JES was also awarded The Malahat Review’s Long Poem Prize in 2019. Their novel, Vanishing Monuments, was shortlisted for the Amazon Canada First Novel Award, and Junebat was shortlisted for the Raymond Souster award from the League of Canadian Poets.

John’s newest novel, My Volcono, is described by Fernando A. Flores as “a fast-paced, gripping, singular novel that belongs to the new wave of eco-horror yielding to no conventions.” It is a pre-apocalyptic story that follows a diverse and global cast of characters, each experiencing private and collective eruptions.

JES currently live with their wife – and their terrier, Grendel – in Kansas City, MO. There, they teach writing at the Kansas City Art Institute, sit on the editorial board at Contemporary Verse 2, and are a studio resident at Charlotte Street.

You can learn more about John and their work at https://johnelizabethstintzi.com/ 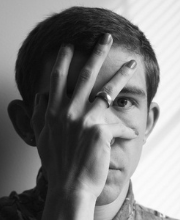 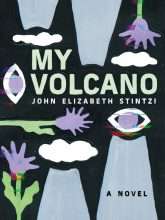