Julie Salverson is a professor of drama and cultural studies at Queen’s University and has served as Artist-in-Residence at The Royal Military College of Canada. She is a playwright of four plays that have been staged in Toronto, Sudbury and Kingston; a librettist of the opera, Shelter, a fable for the nuclear age that has been produced in Edmonton and Toronto; and a facilitator of resiliency workshops for veterans, first responders, and others who have experienced trauma.

Through her writing and her work as a community theatre animator across Canada, Julie has concentrated on giving a voice to those who are voiceless or marginalized by society. RMC professor, Michael Hurley, describes Julie as “a healer of cultural wounds… a highly imaginative builder of community and consensus through creativity, compassion, and empathy.”

Julie is launching her first book, Lines of Flight: an atomic memoir at Kingston WritersFest. In this wide-reaching memoir, she traces a radioactive trail from a small village outside Toronto to Great Bear Lake in the Northwest Territories and on to Hiroshima. Lines of Flight is a cultural study of growing up in the nuclear age, an atomic poetics. Salverson reacted to an explosive family and the world’s dangers by becoming an anti-nuclear activist, an artist and a scholar. Overwhelmed by trauma, and on the verge of losing faith in anything, she discovered a little-known connection between Canada’s north and the atomic bomb that fell on Japan that became the start of a ten-year journey. Written with energy and hope, Julie’s memoir is a unique guidebook for life in the twenty-first century: how do we hold onto hope and find meaning in this terribly beautiful world?

Julie’s writing includes academic essays, short stories, plays, and even articles in a magazine dedicated to horse riding. She was a finalist in the 2009 CBC Literary Award for Creative Non-Fiction and gained Creative Non-Fiction Special Mention in the Malahat Review’s 2008 awards. 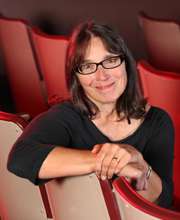