Katherine Govier’s most recent novel is The Three Sisters Bar and Hotel, a story of mystery – and pre-history – set in Banff, Alberta, in the early days of the last century. Her previous novel, 2010’s The Ghost Brush, about the daughter of the famous Japanese printmaker Hokusai was published in the United States as The Printmaker’s Daughter, and has appeared in translation in Romania, Spain, Quebec, and Japan. Her novel Creation, about John James Audubon’s time in Labrador, was a New York Times Notable Book of the Year in 2003. In 1997, Katherine won the Marian Engel Award, given to recognize a female writer in mid-career. Her book Hearts of Flame the Toronto Book Award in 1992, and she has twice been shortlisted for Ontario’s Trillium prize. The author of thirteen books in all, Katherine has been instrumental in establishing two innovative writing programs, Writers in Electronic Residence and The Shoe Project, which works to improve the written and spoken English of immigrant women. She divides her time between Toronto and Canmore, Alberta, in the Rocky Mountains. 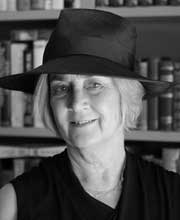