Kathleen Winter is an acclaimed author of fiction, short fiction, and memoir. Her debut novel Annabel was shortlisted for the Scotiabank Giller Prize, the Governor General’s Literary Award, the Rogers Writers’ Trust Fiction Prize, the Amazon.ca First Novel Award, and numerous others. It made many best book lists, and has been published and translated worldwide. Her Arctic memoir Boundless was shortlisted for the Hilary Weston and Charles Taylor non-fiction prize.

This Fall, Kathleen makes her long-awaited literary return with Lost in September, an inventive re-writing of history that drops General James Wolfe – now Jimmy, a homeless war veteran with PTSD – onto the streets of modern-day Montreal to live out eleven days that were lost to him in 1752. The story takes its inspiration from fact – in 1752, Wolfe was granted leave to travel to Paris to study poetry, music and dance. But that year, the British Empire abandoned the Julian calendar for the Gregorian, choosing to erase September 3rd -13th, the very dates of James’ trip.

Born in the UK, Kathleen lives in Montreal after many years in Newfoundland. 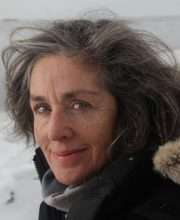