“Here’s what I think any writer trying to finish a book should do: find a job that requires you to be awake, sober and dressed at seven in the morning, under threat of a loud man or woman coming to your door. … There should be an absolute absence of interesting conversation or intellectual stimulation, but books should be available and the mail should be reliable.  I’m thinking that there are a few possible jobs that meet most of these… but a regimental doctor in a peacetime Canadian Army formation is pretty much the ideal.”

Kevin Patterson grew up in Manitoba, and put himself through medical school by joining the Canadian army. Now a specialist in internal medicine, he practices in the Arctic and on Vancouver Island. His first book, a memoir called The Water in Between, was a Globe Best Book and an international bestseller. Country of Cold, his debut short fiction collection, won the Rogers Writers’ Trust Fiction Prize as well as the inaugural City of Victoria Butler Book Prize. He is also the author of the critically acclaimed novel, Consumption.

In the winter of 2007, Kevin spent three months working at a hospital in Kandahar, treating civilians and soldiers alike. Drawing from that experience, he co-edited Outside the Wire, an anthology of writing about the war in Afghanistan in the words of soldiers, doctors, and volunteers who have experienced it. It also inspired his latest novel, News from the Red Desert, which is being heralded as “the definitive novel of the Afghan War”. Set in Afghanistan in late 2001, this honest and unsettling story explores the lives of the men and women drawn to war by a sense of purpose, danger, and adventure. Playwright Hannah Moscovitch calls the novel “stunning and deeply disquieting, News from the Red Desert powerfully captures the bizarre collisions and endless complexities of a hyper-modern global war. Authentic, suspenseful and gritty.” 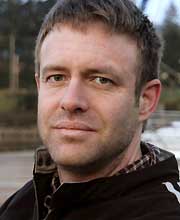