As a boy, Lawrence Hill dreamed of winning an Olympic gold medal in the 5,000 metres. Despite training hard, he never managed to run quite fast enough, and consoled himself as a teenager by deciding to become a writer instead.

In Lawrence’s eagerly anticipated fourth novel, The Illegal, the main character is an elite marathoner who flees repression in his own country and goes into hiding in a wealthy nation where his very presence is illegal, and where he must keep running in order to survive.

“The lives of undocumented refugees have haunted me for years,” says Lawrence of his inspiration for The Illegal, to be released in fall 2015. “Will they be welcomed or deported? Persecuted in countries new or old? These questions became my obsession.”
Much of Hill’s other writing also touches on issues of identity and belonging. The son of American immigrants—a black father and a white mother—he grew up in the predominantly white suburb of Don Mills, Ontario, in the sixties.

Of his previous novel, The Book of Negroes, which inspired international acclaim, The New York Times wrote: “Populated by vivid characters and rendered in fascinating detail.” “Stunning, wrenching and inspiring,” wrote Publisher’s Weekly in a starred review. “A harrowing, breathtaking tour de force.”

The 2007 book won many literary awards, including the Rogers Writers’ Trust Fiction Prize, the Commonwealth Writers’ Prize and the 2009 edition of CBC’s Canada Reads, and was adapted into a well-reviewed mini-series. His acclaimed non-fiction work includes Blood: The Stuff of Life, which formed the basis for his 2013 CBC Massey Lectures.

Lawrence lives with his family in Hamilton, Ontario, and Woody Point, Newfoundland.

Appearing in 15. International Marquee, and 26. Freedom to Speak, Freedom to Act 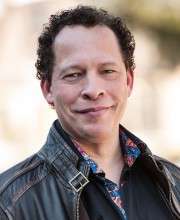