Lawrence Scanlan is an eclectic, prolific writer whose curiosity often takes him into uncharted territory. A journalist for nearly four decades, he was a CBC literary producer for Peter Gzowski’s Morningside, literary editor of The Kingston Whig-Standard and managing editor of Harrowsmith Magazine. As a freelancer he has written articles on scores of subjects, including science, sports, literature, travel, and medicine, winning three National Magazine Awards.

He is the author or co-author of over two-dozen books and served as ghost-writer for several Canadian personalities, including Margaret Trudeau, Richard Peddie, Olivia Chow and Robert Bateman. His subjects are diverse – from the horse-human bond (Wild About Horses) to philanthropy (A Year of Living Generously: Dispatches from the Front Lines of Philanthropy), to his most recent project, They Desire a Better Country/ Ils desirent une patrie meilleure, a book commissioned by Rideau Hall to celebrate the Order of Canada’s fiftieth anniversary and introduce Canadians to some of the remarkable people who have been honoured with the award.

Lawrence lives in Kingston with partner Ulrike Bender, and spends as much time as he can at his cabin in Prince Edward County.

Appearing in: The Boy in the Photo: Life in Syria and the Refugee Crisis, Run to Freedom: Historical Fiction 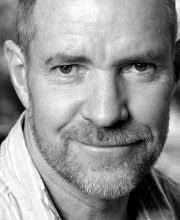