Leanne Lieberman is the author of five YA books, most recently The Most Dangerous Thing, about a teenage girl stymied in her desire for intimacy by anxiety, depression, and fear of her own sexuality. “I decided to write about mental health”, she says, “because I realized so many people… were coping with some serious mental health issues. And mostly, no one was talking about their problems.”

Not one to shy away from difficult topics, Leanne’s writing has been described in The Globe and Mail as “like origami, in which meanings gently unfold.” Gravity, a Sidney Taylor Notable Book, dealt with the struggle to reconcile religious belief and sexual orientation, Lauren Yanofsky Hates the Holocaust demonstrated the tough moral choices teens wanting to belong can face, and The Book of Trees was lauded for its fresh approach to the difficult topic of Israeli/Palestinian relations. Kirkus Reviews notes the authentic representation of anxiety and depression in The Most Dangerous Thing and calls it “a tale of recovery and empowerment.”

Leanne’s adult fiction has been published in Descant, The New Quarterly, Fireweed, The Antigonish Review and Grain. She grew up in Vancouver, holds degrees from McGill, Queen’s and the University of Windsor, and lives with her husband and two sons in Kingston, where she teaches elementary school (including sex ed.)

Appearing in: 7. Differences and Similarities: YA Fiction, 12. Writing Difficult Topics 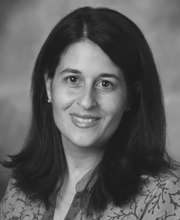