“One of the foremost Indigenous writers in North America” – CBC Books

North Vancouver–born Lee Maracle, a member of the Sto: Loh nation, is the author of numerous critically acclaimed literary works, including Sundogs, Ravensong, I Am Woman, and Talking to the Diaspora. She is the co-editor of several anthologies, including the award-winning My Home As I Remember.

In her latest book, a series of essays called Conversations with Canadians, it, Lee reflects upon complex questions of citizenship, segregation, labour, law, predjudice and reconciliation.

Lee’s many awards include the Queen’s Diamond Jubilee Medal, the Ontario Premier’s Award for Excellence in the Arts, and an Honorary doctorate from St. Thomas University. She currently teaches Oral Tradition in the Aboriginal Studies Program at the University of Toronto, and is an instructor at the Centre for Indigenous Theatre. She is also the Traditional Teacher for First Nation’s House, and has served as Distinguished Visiting Scholar at the universities of Toronto, Waterloo, and Western Washington. 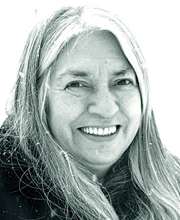