“To begin,” says Brent Robillard, “I write longhand in messy, fat, spiral-bound, five-subject notebooks. So I can write anywhere. And I do. But admittedly, I am a creature of comfort. Although I enjoy the outdoors, I will not play victim to its precariousness while I write. I do not want my pages ruffled by the wind. I need climate control. Coffee. Anonymity.”

In contrast, the spotlight is where Brent will be this fall with the release of his latest novel. He will join featured authors including Nino Ricci, Greg Hollingshead, and Marina Endicott on stage at Kingston Writersfest’s popular “Saturday Night Speakeasy” event September 26.

The Road to Atlantis, his fourth book, follows the Henry family on a summer vacation. Driving along the coast, they stop for a break at the beach. Matty and Nat build castles in the sand as Anne and David take turns minding the children. A moment of distraction, a blink of the eye, and the life they know is swept away forever.

“Robillard is a confident storyteller, with an eye for detail and a cinematic approach to scene-setting,” wrote the Winnipeg Free Press of his novel Houdini’s Shadow. “Its portrayal of Montreal subculture is compellingly vivid, right down to the back alleys, seedy nightclubs, and shady characters.”

Brent’s two other well-received novels are Drift, and Leaving Wyoming. His work has appeared in various magazines, journals, and anthologies in Canada and abroad, including The Fiddlehead, Grain, Prairie Fire, and Queen’s Quarterly. He is a past recipient of the George Johnston Poetry Prize.

He lives in Athens, Ontario, with his wife and two children. 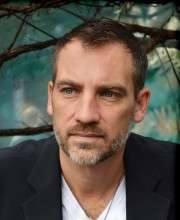