“Do Not Say We Have Nothing will cement Madeleine Thien as one of Canada’s most talented novelists, at once a successor to Rohinton Mistry and a wholly singular stylist,” Globe and Mail reviewer, David B. Hobbs stated recently. Considering her books, beginning with her debut short story collection, Simple Recipes that won the BC Book Award, all have garnered prestigious awards and critical acclaim, surely he is not alone in this assessment.

Madeleine says, “I see literature as a space of equality, a vast field of sound. The reader is not harnessed in. Her stories and novels explore both discreet character details and wide-ranging social-political movements. Certainty won the Amazon First Novel Award with a canvas of memories and unresolved legacies of the Second World War. Dogs at the Perimeter narrates two Canadians’ connections to the Khmer Rouge genocide in 1976 Cambodia. It was shortlisted for Berlin’s International Literature Prize and won the 2015 Frankfurt Book Fair’s Liberaturpreis. Her new novel, an intergenerational saga with a Vancouver-based narrator, encompasses China’s Cultural Revolution and Tiananmen Square massacre.

She has taught literature and fiction in Canada, China, Germany, Nigeria, the United States, Zimbabwe, Singapore, and Japan, and her books have been translated into 25 languages. Madeleine was born in Vancouver, the child of Malaysian-Chinese immigrant, and now lives in Montreal. 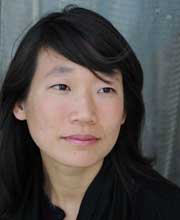