Marc Garniss is the director of the Kingston Canadian Film Festival (KCFF), the world’s largest all-Canadian film festival. The 2019 festival was his sixth season with the organization.

Marc’s interests include hockey and the Toronto Maple Leafs, playing guitar (he toured in a band from 2007-2010, playing shows across Canada, the US, and Europe), and of course, Canadian movies. Marc is an avid festival-goer and enjoys experiencing new events whenever possible, with recent trips to the Edinburgh International Film Festival, Pop Montreal, and the Orlando Fringe Festival.

Marc lives in Kingston with his wife Moira Demorest and their cats.

Appearing in: 2. Love is in the Air: An Unconventional Love 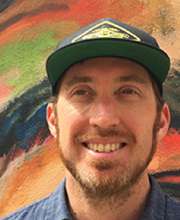