Marc Garniss is the Director of the Kingston Canadian Film Festival (KCFF), the world’s largest all-Canadian film festival. The 2018 festival will be his fifth season with the organization.

Prior to KCFF, Marc managed KPP Concerts (aka Kingston Punk Productions), an independent concert promotion collective he formed with several friends while studying History at Queen’s University from 1998-2002. KPP has organized hundreds of concerts, including shows for Arkells, Henry Rollins, City and Colour, Fred Eaglesmith, Dinosaur Jr., Bedouin Soundclash and many others.

Marc’s interests include hockey and the Toronto Maple Leafs, playing guitar (he toured in a band from 2007-2010, playing shows across Canada, the US, and Europe), and of course, Canadian movies. Marc is an avid festival-goer and enjoys experiencing new events whenever possible, with recent trips to the Edinburgh International Film Festival, Pop Montreal and the Orlando Fringe Festival. 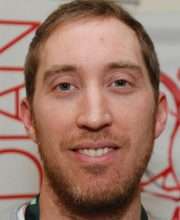