The author of more than 40 books of fiction, poetry, and critical essays, Margaret Atwood is also an environmental activist, inventor, and active tweeter. In 2009, she opened the inaugural Kingston WritersFest with The Year of the Flood. This year she returns to celebrate our fifth anniversary and the launch of MaddAddam, the final installment in her speculative fiction trilogy.

Though Canadians claim her, Margaret Atwood is among the most-honoured novelists in recent history, worldwide. She has won the Prince of Asturias Award for Literature, has been shortlisted for the Mann Booker Prize five times, winning once, and here at home, she has been a finalist for the Governor General’s seven times, winning twice. She has been awarded a Guggenheim fellowship, won three Trillium Book Awards, and some 50 other prizes.

Her oeuvre is nothing short of amazing. She has published 14 novels, 22 poetry collections, 7 books for children, 10 works of nonfiction, 3 ebooks, 3 television scripts, 2 opera libretti, a comic under the pseudonym Bart Gerrard, edited five anthologies, and published four collections of stories and three collections of “unclassifiable” short prose works. Her work of literary criticism, Survival, continues to be the classic introduction to CanLit around the world.

Needless to say, she started early. Born in Ottawa, Margaret spent much of her childhood in northern Quebec and didn’t attend school full-time until she was in Grade 8. She became an avid reader or an early storyteller, fascinated by myth and fairy tales, which continue to inform her work. She published her first book of poems at the age of 22, and her first novel, The Edible Woman, at 30. Over her 52-year career, she has been on the cutting edge of narrative form and new digital platforms. This summer she published a digital serial novel called Positron which prompted The Guardian to dub her “literature’s digital doyenne.”

Readers love her, and the critics agree, hailing her as a “scintillating wordsmith” (The Economist), a writer of “sentences so good I want to feel them in my own pen” (Quill & Quire), and perhaps most tellingly of all, “Atwood believes in human beings, and she likes women” (New York Times Book Review).

Margaret lives in Toronto, ON and on Twitter, where she Tweets daily. 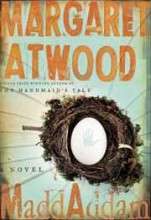