Margaret Atwood kicks off Kingston WritersFest with a dramatic reading of her eagerly awaited new novel, The Year of the Flood, a brilliant visionary imagining of a post-apocalyptic future glimpsed in Oryx and Crake. By turns dark, tender, violent, thoughtful and witty, The Year of the Flood tells the stories of two survivors in a world that is as cannily familiar as it is haunting and strange

One of the preeminent writers working today, Atwood is an award-winning poet, short-story writer, novelist and essayist. She is among the most-honoured authors in the English language. Her novel set in the Kingston Penitentiary, Alias Grace, won the Booker Prize, an award for which five of her books have been nominated. She has won the Governor General’s Award twice — for The Circle Game and The Handmaid’s Tale — and has been nominated an additional seven times.

The daughter of an entomologist, Atwood was born in Ottawa, grew up in northern Quebec and Ontario, and came of age in Toronto. Her work demonstrates astonishing versatility, sharp observation of human foibles, razor-sharp wit and an enduring love for Canada.

Her novels include The Edible Woman, Surfacing, Lady Oracle, Life Before Man, The Handmaid’s Tale, Alias Grace and Oryx and Crake. Books of poetry include Double Persephone, The Circle Game, Animals in That Country, Journals of Susanna Moodie, Power Politics and Morning in the Burned House. Her published Massey lecture, Payback, was a national bestseller. She has also written several children’s books, including the recently reissued Up in the Tree, which she wrote, hand-lettered and illustrated.

A long-time opera lover, Atwood has also seen her work adapted for the stage, including The Penelopiad, a cabaret of music and drama, and an opera version of The Handmaid’s Tale. She has recently written the libretto for a chamber opera on the life of Pauline Johnson.

She lives in Toronto with Graeme Gibson. 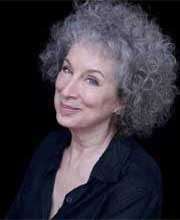