“When I was drawing myself, I realized I was developing a massive crush on my 18-year-old self” says author and illustrator Marianne Boucher, “because of her vulnerability and her bravery and she was so kind. In the end I dedicated the book to my 18-year-old self. And I think that’s called healing? Maybe that’s what graphic novels do.”

Marianne Boucher has been a competitive figure-skater, a cult member, and is now an artist, court reporter, and author. Marianne attended OCAD University and now covers major Canadian court cases as a courtroom illustrator.

Her recent graphic book, Talking to Strangers: A Memoir of My Escape from a Cult, recounts her experiences in a cult, where she was subjected to sophisticated brainwashing techniques that took away her freedom, and took over her mind. The novel shares how she fell in with devotees of a frightening spiritual abuser, and how she eventually, painfully, pulled herself out. “I think there’s different ways of ‘waking up.’ Some of them are more dramatic, almost like a light bulb or a switch. But I think mine was more gradual.”

She lives in Toronto with her family.

Appearing in: 5. Graphic Description: Memoir of a Moonie 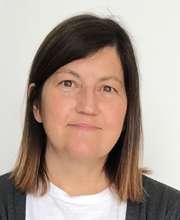 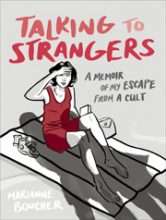