Mariko Tamaki’s most recent book, Skim, a graphic novel illustrated by her cousin, Jillian Tamaki, is a hilarious, poignant and stunningly beautiful book about the heartache of being sixteen. It was named a New York Times Book Review Best Illustrated Book, as well as receiving the Ignatz Award for Outstanding Graphic Novel and the Doug Wright Award for Best Book. It was also nominated for a Governor General’s Award and named a Publishers Weekly Best Book of the Year.

Mariko is a writer and performance artist who incorporates her keen observations of the strange, the weird and other fabulous forms of human behaviour into her work. She has been a columnist for Kiss Machine and Herizons, and she is the author of True Lies: The Book of Bad Advice, Fake I.D., Cover Me and Emiko, Superstar. She has just returned from a trip to Barcelona to launch the Spanish edition of Skim.

She lives in Toronto, where she teaches English and creative writing. 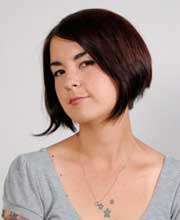