Born in Golden, BC, Marina Endicott grew up in Nova Scotia and Toronto. She began her career first as an actor and director, and worked in first in Ontario and then in England, where she began to write fiction.

“Every sentence… made me want to read the next one,” gushes the Literary Review of Canada about Marina’s writing, and notes her “quirky, evocative phrasing.” Other accolades of Marina’s work continue this high praise. Her first book, Open Arms, was short-listed for the Amazon First Novel award. Her second, Good to a Fault, a finalist for the Giller Prize and a CBC Canada Reads book, won the Commonwealth Writers’ Prize (Best Book, Canada/Caribbean). The Little Shadows was shortlisted for the Governor General’s Award, and both that book and Close to Hugh were longlisted for the Giller Prize.

Her new novel, The Difference, is a sweeping historical novel based on true events, set on the South Seas in 1912. Author Helen Oyeymi calls it a “beautiful book, so lovely in its graveness, and in its comedy … The cut of the prose is so keen and the happenings are so finely wrought.” 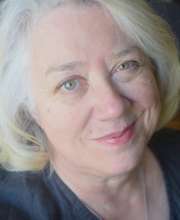