Unlike Dolly—a character in her critically acclaimed novel, Good to a Fault—Marina Endicott has never stolen a book. But, she admits, “I certainly would have, if it had occurred to me.” Growing up, she spent much of her time in the family library. “Whatever was in the shelf was my meat.”

Reading inevitably led to writing. Though she trained and worked as an actor, director, and dramaturge in Canada and England, Marina never stopped scribbling stories and poems in between her other duties. Finally, she submitted one of those stories to a literary journal. Since then, she’s never looked back.

Her newest release promises the same rich satisfactions. An exuberant, poignant study of two generations on the cusp of change, Close to Hugh tells the story of what happens to a close-knit group of friends during one autumn week after the 50-something protagonist suffers a fall and subsequent mental rearrangement. Warm and witty, Close to Hugh is a sharply observed comedy about youth and age, art and life, and love and death.

Married and the mother of two, Marina lives in Edmonton. 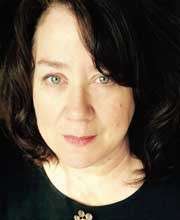