Mark is an award-winning author, journalist, historian, lecturer, and expert on propaganda and censorship as a consultant at the Canadian Forces Public Affairs School. Mark’s National Magazine Award–winning journalism has appeared in the Globe and Mail, the Toronto Star and other newspapers and major magazines in Canada and the United Kingdom. He spent two-dozen years as a member of the Canadian Parliamentary Press Gallery before becoming a lawyer.

Mark is the author of 13 best-selling books including the RBC Taylor Prize-winning Bush Runner: The Adventures of Pierre Radisson. His book Kill the Messenger: Stephen Harper’s Assault on Your Right to Know, was a Globe and Mail Top 100 book of the year.

Mark’s academic writing has been published in Canada and The Second World War: Essays in Honour of Terry Copp the Global Media Journal and the Canadian Journal of Communication.

This year he returns with Big Men Fear Me, the remarkable true story of the rise and fall of George McCullagh, one of North America’s most influential media moguls. Author Elaine Dewar praises the book for showing “us what we come from: a Canada run by drunks, mystics, dreamers, gold miners and gold diggers, the horse crazy, and the power mad. It’s a great story, well told.” Author Charlotte Gray adds that, “written with wit and passion, Big Men Fear Me brings back to life a man who tried to upend Canadian democracy, yet has been almost erased from our history.”

Mark is appearing in: 25. The Big Idea: War of the Words 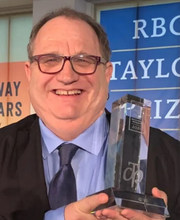