Matthew Forsythe is an award-winning comic book artist and illustrator. His first children’s book, My Name Is Elizabeth! by Annika Dunklee, was named New York Times Notable Children’s Book. His first comic, Ojingogo, was nominated for an Eisner Award and won a Doug Wight Award for Best Experimental Comic. His illustrations have appeared in many publications including The New York Times and The Wall Street Journal. Formerly the lead designer on the animated series Adventure Time on the Cartoon Network, he now lives in Canada.

His latest picture book Pokko and the Drum, is a delightful story about an aspiring drummer, her exasperated parents, and a band of animals that can’t wait to join in the fun! The book has garnered high praise, being named a best book of the year by Publishers Weekly, the Today Show, NPR, Booklist and called “extraordinary”, “inspirational”, “laugh-out-loud funny” and an “instant classic” in numerous starred reviews.

Appearing in: Guest Storytime: Pokko and the Drum by Matthew Forsythe 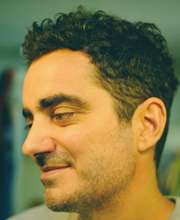