When Merilyn Simonds isn’t at her desk, you can often find her in her garden. “I have been gardening almost as long as I have been writing,” she says. “I learned to write by reading. I learned to garden by digging. In both cases, I was driven by the divine: I wanted to fashion a world all my own.”

And fashion it she has—in extraordinary style. An award–winning freelance journalist, she published nine nonfiction books and scores of magazine articles on subjects ranging from soap–making to war before her making her literary debut with The Convict Lover, a book that almost single–handedly sparked the renaissance in Canadian literary nonfiction, and won her national and international acclaim. She followed up with a bestselling collection of linked autobiographical stories, The Lion in the Room Next Door, and a novel, The Holding, which the Globe and Mail called “compelling…hypnotic” and “as engrossing as the most intensely crafted psychological drama.” The Holding was on the Canadian Booksellers’ Association bestseller list for five months and was a New York Times Editors’ Choice.

Merilyn’s latest book, co-written with her husband, Wayne Grady, is Breakfast at the Exit Café: Travels in America>, a memoir in alternating voices about their road trip from British Columbia around the perimeter of the United States. For Merilyn, who grew up a lonely Canadian in the American School of Campinas, Brazil, this trip became a journey into the heart of the ex-pat promised land, the nation of the American Dream–but the Americans she met in her travels prompted her to reassess her assumptions about our powerful neighbour.

Like her books, Merilyn’s gardens have attracted notice; she won a Green Thumb award in Kingston for her front-yard patch where a hedge of snow peas rubbed shoulders with perennial herbs and flowers. She now lives north of the city, where she’s converting acres of lawn into beautiful flower and vegetable beds and writing a weekly essay, which she posts on frugalistagardener.com. A collection of those essays, A New Leaf: Growing with my Garden, will be published in March, 2011, by DoubleDay Canada.

For the past two years, Merilyn has also brought her astonishing creative energies to her role as Artistic Director of Kingston Writersfest. 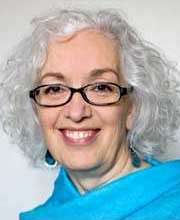 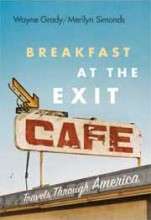