M.G. Vassanji is the author of seven novels, two short story collections, two memoirs, and a biography of Mordecai Richler. His novel The Gunny Sack won a regional Commonwealth Writers’ Prize, and The Book of Secrets and The In-Between World of Vikram Lall were both Giller Prize winners. Other awards include a Governor General’s Prize for nonfiction, the Harbourfront Festival Prize, the Commonwealth First Book Prize, and the Bressani Prize. The Assassin’s Song was shortlisted for the Giller Prize, the Governor General’s Prize, the Writers Trust Award, and India’s Crossword Prize.

This fall, M.G. returns with A Delhi Obsession, a powerful new novel about grief and second chances, tradition and rebellion. Munir Khan, a recent widower from Toronto, decides on a whim to visit Delhi, his ancestral city, though he has never visited India before. There he meets Mohini, an attractive married woman from a very different background. Soon an inexplicable attraction and passionate love affair begins.

M.G. is a member of the Order of Canada and is the recipient of the Canada Council Molson Prize for the Arts and several honourary doctorates. He was born in Nairobi and raised in Tanzania before moving to Canada. He lives in Toronto. 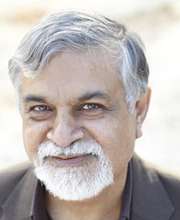