“A lot of my works stems from dream-like visions” says poet Michael Casteels. “I think that’s how I take the world in,” he says. “I see a lot of chaos in the world, a lot of randomness. But I’m not intentionally dark: I hope I approach the darkness with a bit of humour.”

Michael Casteels runs Puddles of Sky Press and has published more than a dozen chapbooks of poetry, including Solar-powered Light Bulb and the Lake’s Achy Tooth. His work has appeared 529, Sterling Magazine, The Undergraduate Review, Incongruous Quarterly, In/Words, and That Not Forgotten among others. He was nominated for the emerging artist award in the 2012 Premier’s Awards for Excellence in the Arts.

In 2016, Michael published his first full-length book of poetry, The Last White House at the End of the Row of White Houses. Kingston poet Jason Heroux called it “one of the most exciting debuts to appear in Canadian poetry. Brilliant, strange, beautiful and encouraging.” Wayne Grady adds “there is a strange, apocalyptic logic to his words.” 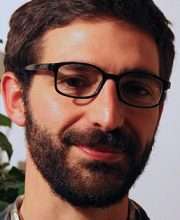