Veteran broadcaster Michael Enright, host of CBC Radio One’s The Sunday Edition, is known for his distinctive voice as much as his consummate interviewing skills. In a 2009 interview for the Ryerson Review of Journalism he admitted he’d much rather ask questions of others than answer them about himself.

Enright has been with CBC radio since 1974 and hosted This Country in the Morning, co-hosted As It Happens, first with Alan Maitland and then Barbara Budd, and co-hosted This Morning for a time with Avril Benoit, before hosting the show solo. Since 2000, he has been host of The Sunday Edition. A long-time investigative journalist, he has written for Time, Maclean’s, the Toronto Star, and The Globe and Mail.

His interviewees are as prominent as they are diverse: actors Robert Redford and Mickey Rooney; painter Mary Pratt; poet Michael Crummey; and authors Carl Honoré, Graeme Gibson, and Claire Messud, and Pulitzer Prize-winning American writer Michael Chabon. In 2010, he acted as a judge for the Scotiabank Giller Prize.

Michael was appointed a Member of the Order of Canada in 2012, lives in Toronto, and is busy every Sunday morning. 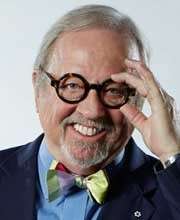