A busy author and stand-up comedian, Michael McCreary was diagnosed with Asperger’s Syndrome when he was five years old. In what he describes as “an act of self-preservation, combined with the desire for constant attention and the inability to stop talking,” he found his way into stand-up comedy. His comedy acts, which tackle “the lighter side of Asperger’s,” have been performed at conferences, galas, universities, bars, and church basements across North America, and have been profiled by the Toronto Star, CTV, CBC and more.

According to Michael, “comedy is the only medium… that can turn a perceived disability into a weapon and that’s what I love about it.”

Michael’s debut book, Funny, You Don’t Look Autistic: A Comedian’s Guide to Life on the Spectrum, is a witty, insightful, and comical trip through his life and experiences dealing with well-meaning folks who are quick to quip that he doesn’t ‘look’ autistic. Described by Open Book as a “unique and hilarious” read, his memoir regularly smashes stereotypes and challenges assumptions with wit, empathy and humour. Booklist calls the book “Fresh, zippy, and funny while at the same time engrossing and enlightening.”

Michael was born in Orangeville, Ontario. 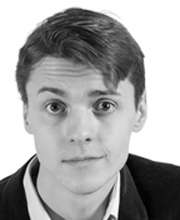