Michael Prior’s first full poetry collection, Model Disciple, explores the double identities of his Japanese-Canadian background, and the natural with the man-made world. “Tashme” tells the story of visiting the site of a World War II internment camp with his grandfather. But as Abbey Paige says in the Montreal Review of Books, “His inventive approaches to self-revelation help break his work out of a purely confessional mode and give it refreshing emotional range.”

Alexandra Oliver, author of Meeting the Tormentors in Safeway blurbs that Prior takes on the topics of “love, loss, war and cultural identity with a combination of fierceness and delicacy so rare in a first collection.”

An earlier chapbook, Swan Dive, prompted Jay Ruzesky to comment in the Malahat Review, “The reason his star shines so brightly is that he is already very good … In many ways – the range of interests, quality of language, the attention to rhythm – Prior’s work is a kind of blend of P.K. Page and Karen Solie, but I make those comparisons to say that his work is already polished and self-assured.”

Currently completing a Masters of Fine Art degree in poetry at Cornell University, Michael holds an M.A. in Creative Writing from the University of Toronto and his poetry has been widely published in Canada, the United States, and the United Kingdom.

Appearing in: 6. TWS – Writing Poetry, 12. Two Worlds: Who Am I When Cultures Clash? 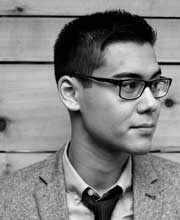