Moira has spent most of her life at the piano. She has constantly pursued a passion for
empowering female voices, as she balances her careers as a musician and concert promoter.

Co-founder of the local concert production company, KPP Concerts, Moira has produced live
concerts for 20 years, working with artists such as Arkells, City and Colour, Pup, and Lights.
Most recently, Moira founded the initiative Spring Reverb, a four-day exhibition to promote,
develop and showcase the Kingston music scene.
Moira continues to write, collaborate, and produce music in the Kingston area. She lives with
her husband Marc and two cool cats.

Appearing in: 26. Daughter of …: Making Her Own Path 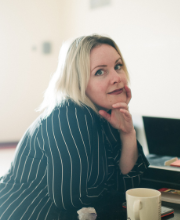