“History is so fascinating, so full of remarkable people and stories. My focus was not so much on the question of nation-building as it was on the individual characters who actually did the clearing of the land, the patrolling of the lakes, and the brawling in the taverns.”

Local novelist and poet Morgan Wade knows that writing historical fiction can be thirsty work. With one novel under his belt, the ReLit Awards long-listed The Last Stoic, Morgan set out to novelize the early legacy of his hometown. The resulting novel, Bottle and Glass, is “a story of survival and escape told from the barstools of two dozen boisterous Kingston taverns at the end of the War of 1812.” Wayne Grady described the novel as “a rake’s progress through the drinking establishments of Kingston.”

The dramatic possibilities of such a journey was not lost on Brett Christopher, artistic producer of Theatre Kingston. “Bottle and Glass leapt out as perfect source material for a Theatre Kingston production that celebrates the city and its unique heritage,” says Brett. Shortly after the book’s release, he approached Morgan to adapt the work for a site-specific theatre production, and Morgan, agreeing that a dramatization seemed “a perfect fit’, developed the playscript. The site-specific, traveling play premiers as part of Kingston WritersFest with two performances, in advance of a full run scheduled for later in the fall.

Morgan’s works have been published in Canadian literary journals and anthologies, including The New Quarterly and The Nashwaak Review. A graduate of the Humber School of Writing, Morgan was mentored by novelist Michael Helm. He also worked closely with Kingston author Helen Humphreys on the development of Bottle and Glass, the novel. Morgan lives with his wife and son in Kingston, Ontario.

Performances of Bottle and Glass take place on the Friday and Saturday nights of Kingston WritersFest. 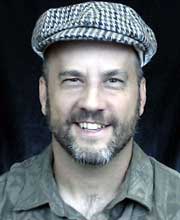