Nicky Guadagni is considered one of Canada’s theatrical treasures, an actress of extraordinary range and intensity. Originally from Montreal, she studied at the Royal Academy of Dramatic Art in London, England, then returned to Canada, to appear at the Stratford Festival, the National Arts Centre, the Factory Theatre, the Tarragon Theatre, and Theatre Passe Muraille in Toronto.

A highly versatile performer, Nicky has undertaken roles ranging from Ariel in The Tempest to Kattrin in Mother Courage, as well as over a dozen parts in the TV detective series Nero Wolfe. She’s been nominated for five Gemini awards and has won two, for her performances in the series Major Crime and Blue Murder. She also starred in the feature film, Cube.

Nicky has a deep and abiding interest in literature. She recorded Jane Urquhart’s The Stone Carvers for CBC’s Between the Covers, and in 2002, she adapted Carol Corbeil’s book In the Wings for theatre. She currently lives in Toronto, where she teaches acting.

A longtime friend of poet Carolyn Smart, Nicky recognized the stage potential of Hooked the moment she read it. “I had an unmistakable attack of greed. I wanted to play all those seven women and say every one of those words.” Some time later, overhearing her husband suggest to Layne Coleman that he could direct seven actresses in a theatrical adaptation of Hooked, she launched herself into the room. “With more bravura than I’ve ever exhibited in my life, I said that they only needed one actress, and she was me.”

The result, as playwright Judith Thompson says, is an “unforgettable evening of theatre.” Originally designed as an intimate production performed with gourmet accompaniments for a small group in seven rooms of a private residence, the performance of Hooked has been adapted by Guadagni for the Kingston WritersFest stage. 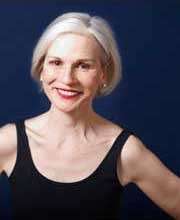