Excitement is building for the fall release of a new novel from celebrated author Nino Ricci. What’s it about? “Someone going through the sort of catastrophic mid-life crisis that I myself hope to avoid,” Nino replies with a grin.

Sleep is the story of one man’s descent into sleeplessness—and into the extremes of human behaviour. David Pace has it all: a successful career as an almost-famous academic, a wife blessed with beauty and brains, a young son and a lovely home. But his brain has begun to misfire. It shuts off when David is meant to be awake—when he’s writing, when he’s lecturing, when he’s driving—but otherwise denies him any rest at all.

Sleep, described as suspenseful and devastating, is poised to become yet another success in a long string of successes. Nino’s first novel, the acclaimed Lives of the Saints, spent seventy-five weeks on the Globe and Mail’s bestseller list and won the Governor General’s Award for Fiction. It was published in seventeen countries and was the first volume of a trilogy that continued with In a Glass House and Where She Has Gone, which was nominated for the Giller Prize. The trilogy was adapted as a miniseries starring Kris Kristofferson and Sophia Loren.

Books in Canada commented that Ricci’s trilogy “so amply demonstrates the author’s tremendous talents that we would be foolish as readers not to follow him down whatever road he next chooses to follow.”

Next, readers embraced Testament, hailed as a “masterpiece” by Saturday Night. Nino’s fictional retelling of the life of Jesus won the Trillium Award and was a Times Literary Supplement Book of the Year. His national bestseller The Origin of Species earned him the Canadian Authors Association Fiction Award as well as his second Governor General’s Award for Fiction. “This novel does so well, on so many levels,” wrote the Toronto Star, “that it’s hard to know where to begin tallying up the riches.”

Nino is also the author of Pierre Elliott Trudeau, was recently appointed to the Order of Canada, and lives in Toronto with his wife, writer Erika de Vasconcelos, and their children. 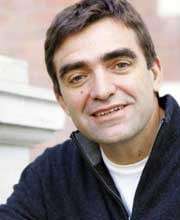