“I like stuff with palpable urgency” says Pasha Malla, “—a sense that the author is writing against their own death, in a way, maybe. A sense of humour helps too.”

Pasha is the author of five works of poetry and fiction, including the story collection The Withdrawal Method and the novel People Park. His work has won numerous awards, including the Danuta Gleed Literary Award, the Trillium Book Prize, an Arthur Ellis Award and several National Magazine awards. He has also been nominated for the Amazon.ca Best First Novel Award the Commonwealth Prize, the Scotiabank Giller Prize and the International IMPAC Dublin Literary Award. He is a monthly books columnist for The Globe and Mail, and a regular contributor to Newyorker.com, The Walrus and CBC Radio.

Fugue States, Pasha’s latest novel, begins as Ash, a writer, prepares to deliver a eulogy at his father’s funeral and loses himself in a fugue state. This leads to a continent-hopping journey to bail his hapless friend Matt out of jail in India, solve the mystery of a secret manuscript and discover his familial homeland – and himself. Quill and Quire calls it “a timely tragicomedy about western intervention in areas of political turmoil.”

He lives in Hamilton, Ontario. 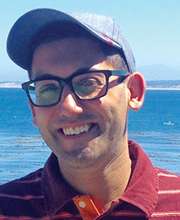