Patrick DeWitt moved around with his family a lot when he was a kid. “At the time, of course, I hated it. But looking back now, I’m really glad, because it forces independence on you,” he says. “I think I became accustomed to a degree of solitude… and that just lent itself to me being comfortable spending the hours alone that writing requires of you.”

His first novel, Ablutions, was a New York Times Editors’ Choice. His second, The Sisters Brothers, won a Rogers Writers’ Trust Fiction Prize, the Governor General’s Award, and the Stephen Leacock Medal for Humour, and was shortlisted for the Man Booker Prize, the Scotiabank Giller Prize, and the Walter Scott Prize for Historical Fiction.

“If Cormac McCarthy had a sense of humor, he might have concocted a story like Patrick deWitt’s bloody, darkly funny western, The Sisters Brothers,” said Carolyn Kellogg in the LA Times. “Fresh, hilariously anti-heroic, often genuinely chilling, and relentlessly compelling,” said Michael Christie in the National Post.

Patrick’s latest release, Undermajordomo Minor, promises readers the same sharp satisfactions. Set in a Kafka-esque European castle, it’s a love story, an adventure story, a fable without a moral, and an ink-black comedy of manners— a brilliantly conceived and wickedly funny work featuring an unusual cast of misfits, madmen, and mortals.

Born in Canada, Patrick now lives with his family in Portland, Oregon.

Appearing in 28. Piquant Picaresque: Inside the Head of Patrick deWitt 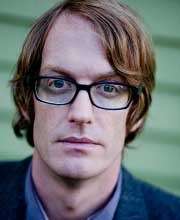