Paul Auster’s narrative voice is “as hypnotic as that of the Ancient Mariner,” says Michael Dirda in the New York Review of Books. “Start one of his books and by page two you cannot choose but hear. While Paul Auster may not have a glittering eye, he still knows how to keep a reader spellbound.”

Paul’s astonishing oeuvre comprises 16 novels, including The New York Trilogy, The Book of Illusions, and Invisible; five screenplays, including Smoke and Blue in the Face; the memoirs The Invention of Solitude, The Art of Hunger, and Hand to Mouth; numerous essays and works of criticism, and three books of poetry. In addition, he has appeared in and directed films, collaborated with visual artists and musicians, written song lyrics, and has lent his resonant voice to many audio recordings, most notably NPR’s “National Story Project.”

In every genre, Paul’s work is preoccupied with questions of identity and the search for meaning. Structurally inventive, self–referential, and frequently characterized by a tongue–in–cheek playfulness, his books are replete with enigmas and riddles to be solved. But if the clues are readily apparent, the answers are often ambiguous. “I am not alone,” he says, “in my belief that the more we understand of the world, the more elusive and confounding the world becomes.”

Much admired in Europe, Paul is the recipient of numerous awards there, including 1989 Prix France Culture de Littérature Étrangère for The New York Trilogy, the Prix Médicis Étranger for Leviathan, and the Prince of Asturius Award for Literature. At home, he has won an Independent Spirit Award for the Best First Screenplay (for Smoke),and has been elected to the American Academy of Arts and Letters.

His most recent novel, Sunset Park, is a taut and lucid story about tough economic times. “Each wounded, questing character’s story illuminates our tragic flaws and profound need for connection, coherence, and beauty,” says Donna Seaman in a Booklist starred review. “In a time of daunting crises and change, Auster reminds us of lasting things, of love, art, and ‘the miraculous strangeness of being alive.’” 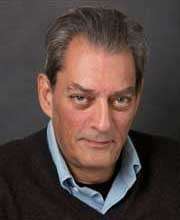 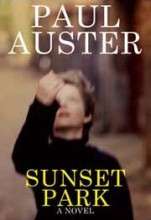