In an interview about his 2011 novel, The O’Briens, Peter Behrens described the characters as “fighting for language” when “there really is no language in their culture” for their experiences in war. Once again in Carry Me, he gives voice to people caught up in the maelstrom of history, trying to make sense of the growing senselessness around them.

Carry Me ranges over early twentieth-century Europe, following the fortunes of two people from the last glow of Edwardian England to the gathering darkness of Weimar Germany in the years leading up to World War II.

Peter’s novels are often explorations of individuals caught up in the currents of history, who struggle to survive and bear witness. Speaking to Jacki Lyden of NPR, he noted, “We’re shaped by the people who come before us, and we shape those who come after us.”

Peter was born and raised in Montreal, where he studied at Concordia and McGill. His first novel, The Law of Dreams, won the Governor General’s Award for fiction and was nominated for the Rogers Writers’ Trust Fiction Prize. He has worked in Hollywood as a screenwriter. He now lives in Maine and Texas.

Appearing in: 17. Stranger in a Strange Land: Displacement and Identity 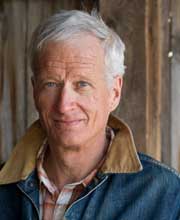