Rabindranath Maharaj is an award-winning Trinidadian-Canadian author of seven novels and three short story collections. His novel, The Amazing Absorbing Boy, won both the Toronto Book Award and the Trillium Fiction Prize, and he has been a finalist for the Rogers Writers’ Trust Fiction Prize and the Commonwealth Writers’ Prize twice.

Rabindranath is co-founder of the literary magazine LICHEN. He’s been a Writer in Residence for several universities and libraries, a mentor for young writers, an instructor, and a faculty member at the Banff Writing Studio. He has published stories, reviews, and articles in various newspapers, literary journals and anthologies, written the radio series “Malcolm and Alvin” for CBC Radio, and co-written a screenplay for the film Malini.

His latest novel, Fatboy Fall Down, follows the life of Orbits, an overweight everyman whose life unfolds as a seemingly endless series of disappointments. Novelist MG Vassanji calls it “a sad, comical tale, beautifully composed, describing the Sisyphean life-journey of a simple man on a simple island, shaped by casual cruelty and limited means.”

Rabindranath is a recipient of the Queen Elizabeth II Diamond Jubilee Medal. He resides in Ajax, Ontario. He has a dog named Pickles and cat named Mr. Mistoffelees.

Appearing in: 37. Literary pub (s)crawl, 45.Beyond the First Draft: Polishing Your Work 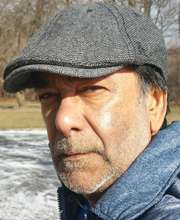