“Like many Canadians, I have a dual identity,” Rawi Hage states. Born in Beirut, his experience of nine years of the Lebanese civil war has informed his work. At age 20, he left for New York and then settled in Montreal, where he was a cabbie for many years. Rawi is a writer, journalist, visual artist, and curator. His artwork has been shown in galleries and museums around the world.

Rawi’s debut novel, De Niro’s Game, won the IMPAC Dublin Literary Award for the best English-language book published anywhere in the world in a given year and was shortlisted for the Scotiabank Giller Prize and the Governor General’s Award. His second novel, Cockroach, won the Paragraphe Hugh MacLennan Prize for Fiction and was a finalist for the Scotiabank Giller Prize, the Governor General’s Award, and Rogers Writers’ Trust Fiction Prize. Carnival won the Hugh MacLennan Prize and the Quebec Writers’ Federation Award. 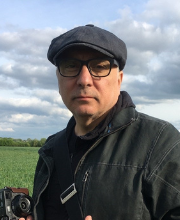