A list of Richard Cumyn’s early jobs suggests rich fodder for fiction: able seaman on a Coast Guard ship out of Prince Rupert, British Columbia; uranium prospector in Northern Saskatchewan; researcher for Prime Minister Pierre Elliott Trudeau; landscape labourer in Fort McMurray, Alberta; short-order cook at the Connaught rifle range west of Ottawa; bookkeeper for the Inuit Tapirisat; and office manager for a Baptist minister. In 1983 he returned to Queen’s for an education degree, then taught high school in Metcalfe, Ontario until 1991, when he began writing full time.

Richard’s short fiction has appeared in the prestigious Journey Prize Anthology, and his nonfiction has been shortlisted for a National Magazine Award. A former editor of The Antigonish Review, he is the author of a novella, The View from Tamischeira, as well as four highly praised story collections, two of which, Viking Brides and The Obstacle Course, were shortlisted for the ReLit Award.

The Young in Their Country, Richard’s latest collection, appears this fall. A finalist for the inaugural Enfield & Wizenty Fiction Prize, its stories are told in his trademark spare, direct, and foreboding prose, revealing characters at once familiar and eerily distinct, their relationships a tender blend of heartbreak and affection. “Each of the stories in this powerful collection is a genuine surprise, unfolding with agility and grace through its unusual characters, unpredictable events, sharply distilled dialogue, and impeccably precise description,” says Governor General’s Award-winning author Diane Schoemperlen. “He is one of our finest story writers,” adds Steven Heighton, “exacting, surprising, deftly attuned both to language and to character, tough-minded and large-hearted at the same time—often within the same sentence.” 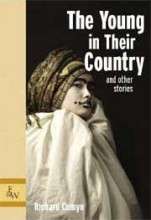