Richard Gwyn’s The Man Who Made Us: John A. Macdonald, 1815–1867 brilliantly recreates the early life of Canada’s first Prime Minister. In pages brimming with anecdote, insight, and originality, Richard brings a lifetime of political thinking to bear on this fascinating, contradictory, and “irreplaceable” character.

Globe and Mail columnist Roy McGregor called The Man Who Made Us “a formidable undertaking gloriously realized—a magnificent book about who we were that, somehow, manages to tell us who we are now.” Winner of the prestigious Charles Taylor Prize for Literary Nonfiction, the book was also shortlisted for the Shaughnessy Cohen Award for Political Writing.

Richard’s latest book, Nation Maker, picks up MacDonald’s story on Confederation Day, 1867, and shows how, despite indifference from Britain and the threat of annexation from south of the border, he wrestled a reluctant union of four provinces in central and eastern Canada into a strong nation. In it, Richard paints a superb portrait of Canada and its leaders through these formative years and also delves deep to show us Macdonald the man, as he marries for the second time, deals with the birth of a disabled child, and the assassination of his close friend Darcy McGee, and wrestles with whether Riel should hang.

Born in England, Richard came to Canada in 1953 and has been writing about politics in this country ever since. He is widely known as a commentator for the Toronto Star on national and international affairs, and has won multiple awards for his journalism. He is also a frequent contributor to radio and television programs.

Richard is the author of six previous books, all highly praised bestsellers, including Nationalism Without Walls: The Unbearable Lightness of Being Canadian, which the Literary Review of Canada named as one of the hundred most important books published in Canada.

He lives in Toronto and summers in Newfoundland, where he established and manages the annual Winterset Award to celebrate Newfoundland writing. 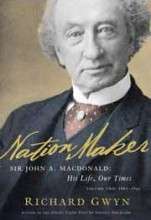