S.K. Ali’s advice for those seeking more diverse literature? “Make what you want to see/read/write and your audience will find you. Don’t be constrained by the canon that came before because that canon didn’t include you.”

S. K. (Sajidah) was born in south India into a family of scholars that is consistently listed in The 500 Most Influential Muslims in the World, and raised in Canada. She has been writing since age 12 and has a degree in Creative Writing. She also loves art and Art, and paints, draws, collages, sews, and doodles to de-stress.

After taking a detour from writing to establish a teaching career and a family, Sajidah published Saints and Misfits in June and has a picture book coming soon. A mother of a teenage daughter herself, her debut YA novel feels like a modern day My So-Called Life…starring a Muslim teen. It is a beautiful and nuanced story about a young woman exploring her identity through friendship, family, and faith.

S. K. advocates for books written by what’s known in the publishing world as “own voices” authors and, with a photo of her personal bookshelf, launched the twitter trend #MuslimShelfSpace to encourage readers to read books that authentically portray diversity. She lives in Toronto with her family and their massive cat named Yeti.

Appearing in: 7. Differences and Similarities: YA Fiction 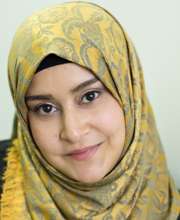