Sadiqa de Meijer’s introduction to poetry can be attributed to her mother – a woman who marked anniversaries, birthdays, ice storms, and even haircuts with verses. “My earliest sense of poetry as a medium was that it was for everyone, and involved pleasure and skill – which is an uncommon introduction, I think, and probably made a difference,” she said in an interview with Open Book: Ontario.

Sadiqa was born in The Netherlands and in her teens she copied out her favourite poems, pieces such as De Gestorvene (The Deceased) by Dutch classicist Ida Gerhardt, and taped them to her wall.

In 2012, she won the CBC Canada Writes Poetry Prize for “Great Aunt Unmarried,” a poem based on a close family friend who died at 93.

Displacement, motherhood, eco-crisis, and immigration are a few of the themes in Sadiqa’s poetry collection, Leaving Howe Island. “I try to just allow myself to write from what feels relevant. And much of that is political,” she said in Kingston Life magazine.

Sadiqa’s poetry has appeared in a number of literary journals including Poetry Magazine, as well as in the anthologies Best of Canadian Poetry in English 2008 and Villanelles. She currently lives in Kingston, Ontario. 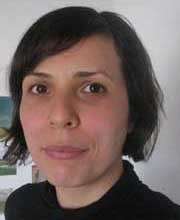