A small aluminum smelting town on the outskirts of Northern Quebec may not seem like the most natural inspiration for an award-winning collection of “gothic, fantastical, and incandescent” short stories, but as Samuel Archibald explains, “Growing up in such a place that is so remote that it’s on the edge or outside history, you never have any history except for the stories you told each other.”

When Samuel’s unusual debut collection of short fiction, Arvida, came out in Quebec, it quickly became a bestseller, selling over 25,000 copies and winning multiple awards. Arvida was recently translated into English by Kingston WritersFest alum Donald Winkler, and soon after landed a coveted place on the Giller Prize shortlist.

Andrew Pyper celebrates Arvida’s appealing strangeness, calling it “a tasty mash-up of genres and tropes, from horror cinema to domestic drama to schoolyard mythology. This is fiction that taps a Jungian vein instead of delivering rational ‘understanding,’ and is all the richer for it.”

Samuel currently teaches contemporary popular culture at the University of Quebec in Montreal, where he lectures on subjects that include fiction, horror movies, and video games. He is married to author Geneviève Pettersen.

Appearing in: 33. Thrillers Made for the Movies, 35. Writing Smart Horror for Page or Screen, 39. Saturday Night SpeakEasy. 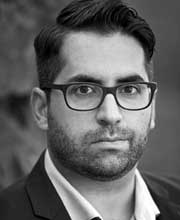