As well as a Juno award-winning musician, Sarah Harmer is an activist, co-founder of PERL (Protecting Escarpment Rural Land) to protect the Niagara Escarpment from development. As a fund- and awareness-raising campaign for the organization, Sarah, her acoustic band, and some friends (including poet and Festival alumni, Tanis Rideout) toured the escarpment and the Bruce Trail, performing in communities along the way. In 2006, a documentary of the tour, Escarpment Blues, was released. Sarah also wrote the foreword for a book about the tour, The Last Stand: A Journey Through the Ancient Cliff-Face Forest of the Niagara Escarpment. In October of 2012, PERL won their case against the development.

Best known as a vocal performer, Sarah joined Toronto-based band The Saddletramps at the age of 17 and continued to play with them while she studied philosophy and women’s studies at Queen’s University. After graduating, Sarah put together the band Weeping Tile, who were enormously popular on the rock club circuit through the late nineties. Sarah released a first solo album of her own songs in 2000, and has in the last decade and a half followed it up with three more highly regarded and award-winning albums. 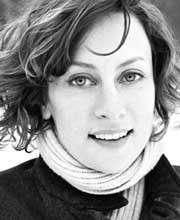