“After nearly a decade,” Quill & Quire writes, “bestselling author of Funny Boy and The Hungry Ghosts Shyam Selvadurai returns with a sweeping new novel set in ancient India. It introduces readers to Siddhartha Gotama – the man who would become Buddha – and Yasodhara, the woman who married him.”

In Mansions of the Moon, Shyam brings 6th century B.C. India to life in fascinating detail, capturing the intricate web of power, family, and relationships that surround a singular marriage – and the remarkable woman who, until now, has remained a little-understood shadow in the historical record.

Shyam was born in Colombo, Sri Lanka, and moved to Canada in 1983. His experience as an immigrant informs much of his writing. “The trauma of migration” survives, he says. “I think the pain of losing your home is something that’s always with us. There’s always a homesickness, and that has to be negotiated in your life in the new country.”

His debut novel, Funny Boy, won the WH Smith/Books in Canada First Novel Award. It was also named a Notable Book by the American Library Association and was translated into 8 languages. His fourth novel, The Hungry Ghosts (2013), was shortlisted for the Governor General’s Award for Fiction.

In 2016, Shyam had the interesting honour of having a spider named after him: Brignolia shyami, a small goblin spider. 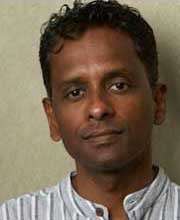